Mellieha, Malta - 19 August, 2012: Hassan Mahamed Dalmar, 21, an immigrant from North Somalia, carries cushions in front of the kiosk he works for at the Mellieha Bay beach, Malta, on 19 August, 2012. Hassan left Somalia in 2007 and went to Djibouti, Eritrea, Sudan, Libya and arrived in Malta in 2009 after paying a smuggler $900 to board a boat with 160 immigrants. After 7 days, the boat had finished its gas, food and water. They were saved by a Finnish ship that brought them to Malta. A finnish worker who helped Hassan told him: "You are born again now. Pray the Lord and start a new life". Upon his arrival in Malta he was put in a detention center for 12 months. His application for refugee status was rejected. He made it to Belgium in August 2011 and was deported back to Malta in January 2012. Upon his return he was imprisoned for 4 months for traveling illegally. He was released on May 28, 2012. Since then he has been working, sleeping outdoors and living in the beach of Mellieha Bay, where he sets up umbrellas and sunbeds from 6:30am to 7:30pm.

Some immigrants work, live, sleep and eat for the entire summer season in the Maltese beaches. Their work consists of waking up at 6:30am and unpile and place sunbeds, cushions and umbrellas at the beach before tourists arrive. Upon their arrival at the beach, tourists are guided by the migrants to the spot they choose. Umbrellas and sunbeds cost 5 euros each. The toursts pay the migrants, whom brings the money to the owner. Each migrant is paid 25 euros a day. By 9am, there are about 90 umbrellas and 180 sunbeds ready for the tourists. 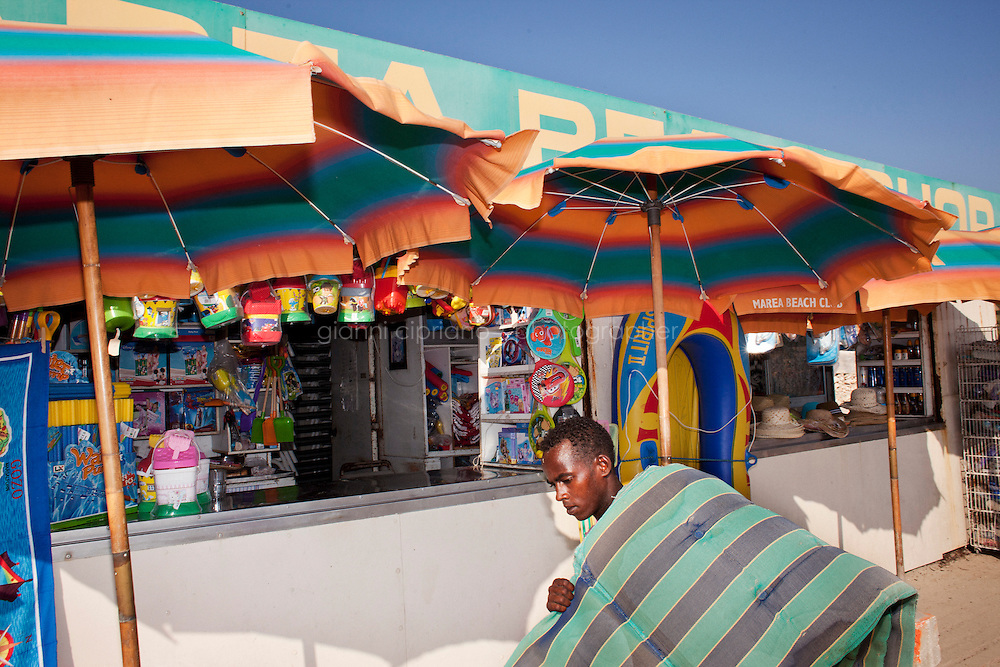